We often think of puppies as cuddly and adorable creatures, but that little wart-like bump you just noticed on your pup’s lip may not be so cute. While lumps and bumps on dogs are not unusual, when they occur in young and/or social dogs, canine oral papilloma virus, or COPV, is on the list of rule-outs for our team at Lone Tree Veterinary Medical Center.

What Is Canine Oral Papilloma Virus?

Viruses can be versatile and are able to manifest in several ways. One presentation of a virus is changes to the skin in the form of a papilloma, or wart. The canine papilloma virus falls in this category.

Highly contagious, COPV most commonly appears in young dogs and, sometimes, in senior dogs due to immune systems that are not as fully developed or robust as in healthy adult dogs between the ages of two to seven.

While COPV warts are usually benign, they still have a rather ugly appearance. Other characteristics of a COPV wart are as follows:

How Dogs Get It

Canine oral papilloma virus is transmitted through direct contact with an infected dog or contaminated items such as bowls, toys, and other objects. In order to be transmitted, it requires a break in the surface of the recipient’s skin (by a scratch, nip, or bite), or contact with a mucous membrane (mouth, eyes, nose, anus).

Are All Dogs Susceptible?

We tend to see COPV warts in dogs with immature immune systems such as puppies, senior dogs with weakened immune systems, or dogs on immunosuppressive medications. Since this is a social disease, sources of infection are often dog parks, dog daycare groups, shelters, and any other setting where dogs interact.

If you notice a wart-like growth on your dog, it is best to schedule a check-up with your veterinarian to determine what the wart is and to rule out anything serious. If needed, a course of treatment will be determined. An antibiotic may also be prescribed if the wart shows signs of infection.

In some cases, it is not possible to diagnose a wart by observation alone. Since warts can sometimes become malignant, when one looks suspicious or persists longer than a couple of months, a biopsy may be warranted. Likewise, if the wart is in a painful or bothersome area, cryotherapy (freezing) or surgical removal may also be recommended.

It is important to mention that, regardless of age, a dog’s overall health also plays a role in how well its immune system responds to a COPV infection. You can help maximize your dog’s immune system by keeping it current on check-ups, following your veterinarian’s recommendations on tests, vaccinations, and oral care, and maintaining your dog’s ideal weight through proper diet and exercise.

On the upside, a COPV infection is rarely serious. The viral warts often resolve on their own in adult dogs within 2 to 3 months, and as the immune system matures in puppies. It is also noteworthy that this virus is not transmissible to humans.

A Word On Prevention

Since the transmission of viral warts occurs primarily in young dogs with immune systems that are still maturing, it is not always preventable. However, regardless of age, dogs with active warts should not be allowed to interact with other dogs in general and, particularly, with young or older immunocompromised dogs until the warts have regressed or disappeared.

If you see a wart-like growth on your dog, do not hesitate to contact us. It is best to have the growth checked by your veterinarian early on to rule out a problem that could become serious, difficult, or expensive to treat if ignored. 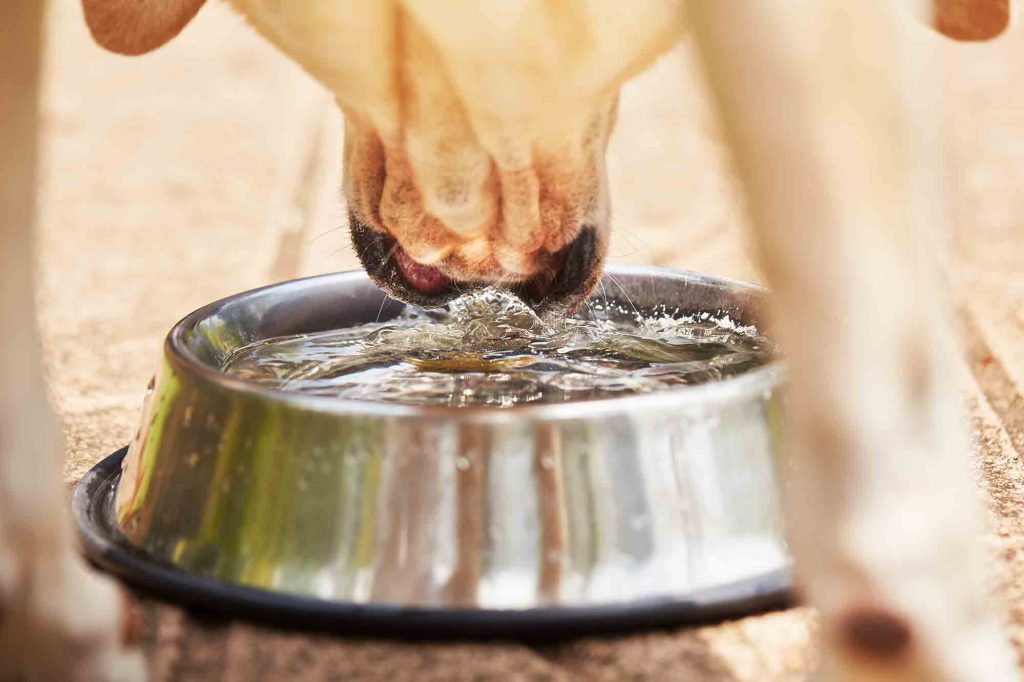 The Heat Is On: Learning to Spot and Prevent Dehydration in Pets

It’s no secret that water is vital to the existence of humans and animals, as well as most other living creatures. Water makes up about 70-80% of a pet’s total body mass and is critical for the proper functioning of each and every cell and system.

Even a small loss of a pet’s fluids can disrupt the body’s delicate balance and result in dehydration. If not corrected, dehydration will impair the body’s functioning and quickly become a medical emergency.